Support for same-sex marriage has soared to records levels in the US with all religious groups showing a rise in approval for gay relationships.

Latest figures from Pew Research reveal Americans are in favour of same-sex marriage by almost two-to-one with recent shifts meaning even Baby Boomers (aged 53-71) are now in favour of allowing gay and lesbian people to marry.

For the first time as many Republicans support gay marriage as oppose it with more than three-quarters of Democrats in favour, data published on Monday showed. 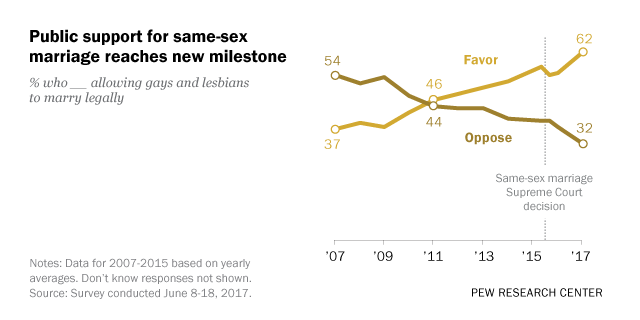 Views continue to differ across religious groups but all show an increase in the proportion backing gay people's right to marry legally.

A wide majority of Catholics (67 per cent), mainstream Protestants (68 per cent) and the religious unaffiliated (85 per cent) back same-sex marriage. By contrast a majority of white evangelical Protestants (59 per cent) oppose legal marriage for gay couples and black Protestants are roughly divided (44 per cent in favour, 50 per cent oppose). 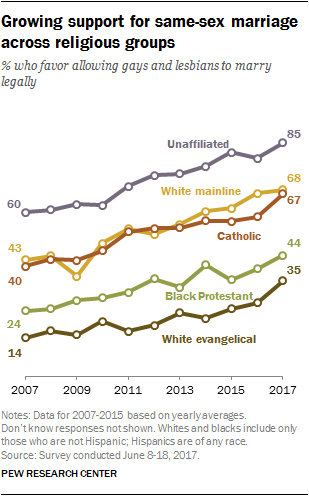 Despite still largely opposing same-sex marriage, white evangelicals show the most dramatic rise in support compared to a decade ago when only 14 per cent were in favour compared to 35 per cent now. 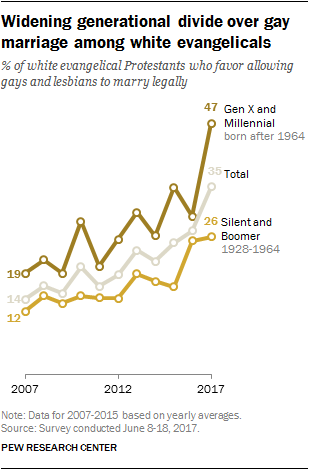 Views among older white evangelicals have shown virtually no change over the past year (26 per cent now, 25 per cent then).