A 210,000-year-old human skull could provide new evidence that our species left Africa much earlier than previously thought. A new study published in Nature of two fossils found in Greece in the 1970s shows that one of them is the oldest Homo sapiens specimen ever found outside Africa by more than 50,000 years.

This exciting discovery adds to a list of recent finds that shows the story of humanity's spread across the world and interaction with other related species is much more complicated than we once thought.

The human skull was one of two cranial fossils found in Apidima Cave, one of a series of cave sites along the southwestern coast of the Peloponnese in Greece. The first, known as Apidima 1, comprised half of the rear of a skull case. Apidima 2 was a largely complete skull with a clear face, but had been heavily distorted during the fossilisation process.

Both were initially identified as Neanderthals and, as uncontroversial specimens, disappeared into the general table of fossils from humans and their closest extinct relatives (hominins). 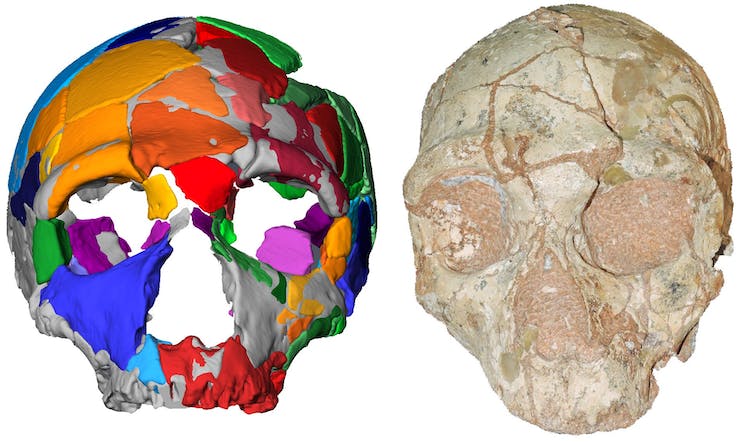 But the recent study from a multinational team led by Katerina Harvati reconstructed the specimens digitally and dated them by measuring their radioactive decay. "Geometric-morphometric" analysis allowed the researchers to reverse model the distortions of Apidima 2 to estimate what it would have originally looked like. This confirmed it was an early Neanderthal dating from around 150,000 years ago.

They also digitally recreated what the whole of the Apidima 1 skull would have looked like and realised it was more likely a modern human (Homo sapiens), dating it to 210,000 years ago.

Human evolution is often thought of as a linear story of new species developing and replacing older, simpler ones. This narrative originally said that modern humans in the southern cape of Africa developed a suite of original ways of thinking and communicating approximately 80,000 years ago.

They dispersed out of Africa and across the world, sweeping all before them from about 70,000 years ago, leading to the demise of Neanderthals in Europe around 40,000 years ago.

But this narrative has grown ever more difficult to sustain because of a range of new fossil discoveries, improvements in their dating and genetic evidence. We now know that modern humans have existed for at least 300,000 years, thanks to a fossil from the site of Jebel Irhoud in Morocco. But they didn't form a single population with a coherent pattern of behaviour before they left the continent.

Specimens from sites in the Levant (modern day Israel, Syria, Lebanon and Jordan) suggest the first wave of modern humans out of Africa were replaced by Neanderthals, before the final, more successful human migration later on.

In southern Africa, modern humans were alive at the same time as a much smaller and seemingly more primitive species called Homo naledi. Genetic evidence from Siberia and recently Tibet has identified a new hominin species – the Denisovans – that shared a history of interbreeding and interaction with Neanderthals. And the presence of Neanderthal DNA in our own genomes shows they also bred with our species.

The new data from Apidima further extends this complex picture of modern human dispersal and interaction with other hominin species. For example, the earlier human skull came from a time when the surrounding environment was warmer and wetter than the cold and arid conditions the later Neanderthal specimen would have lived in.

This emphasises that our explanations for population dispersals need to take into account the context of major environmental change and the opportunities and challenges that went with it.

Our traditional narratives and implicit assumptions of the evolutionary history of modern humans are well and truly broken. The ever-increasing complexity of the evidence we now have means there is no simple reason for hominin dispersal or replacement.

We now need a renewed emphasis on the archaeological evidence to understand and compare what hominins were actually doing in the landscapes where we find their remains. This will enable us to explore the nature of their interactions and not just narrate their consequences.

Anthony Sinclair is Professor of Archaeological Theory and Method at the University of Liverpool. This article is republished from The Conversation under a Creative Commons license.