After a showdown between prime minister Boris Johnson and MPs opposed to a no-deal Brexit, the UK appears on course for an election in a matter of weeks.

Much parliamentary action will now play out to determine exactly when the vote will take place. The government remains eager to ensure the UK's exit from the EU by October 31. Oppositions parties are eager to ensure this does not happen in a no deal scenario. But developments at Westminster mean an election at some point soon is almost certain. The key question, therefore, what might the outcome of such an election be in such unpredictable times?

All polls contain a combination of information and noise, the latter resulting from errors in sampling, in interviewing and in other factors which are an inherent part of survey methodology. By "pooling the polls" the figure maximises the information and minimises the noise because the samples are very large and rogue polls which happen by chance do not dominate the picture. 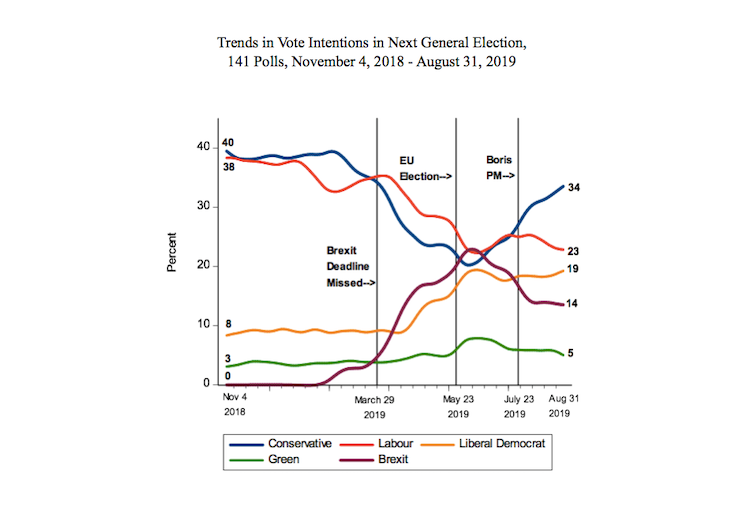 Both Conservative and Labour support declined markedly in the run-up to the European parliament elections on May 23. Since then, Conservative fortunes have partially revived, but party support is only in the low 30% range – nearly 10% less than its vote in the 2017 general election.

Labour is in even worse shape, languishing in the low to mid-20s. Polls on voting intentions go back as far as the 1930s, but it is safe to say that such a car crash in support for both major parties has never been seen before. So we are in uncharted territory.

The major parties' poll numbers indicate that, in a two-party contest, the apparent "Boris bounce" in Conservative vote intentions would very likely deliver a majority in the House of Commons.

One important reason why Labour has fallen so far behind is the large decline in Jeremy Corbyn's popularity since the 2017 general election. His approval ratings then were around 45%. But by August this year they had fallen below 20% and are now very stable from one poll to the next. A large majority of voters appear to have reached the conclusion that he is not up to the job of being prime minister. Negative public feelings about Corbyn are bound to be a drag on his party's efforts to close the gap with the Conservatives.

The situation has now completely changed. If the current surge in Liberal Democrat voting intentions holds, there is a good chance that the party will win back all of the seats it lost to the Conservatives in 2015. In addition, the Lib Dems are likely to win extra seats from disgruntled Conservative Remainers who will defect in response to the Conservative's hard-line stance on Brexit.

What of the Brexit Party?

There is a narrative which suggests that Brexit Party support will collapse in a forthcoming election much like UKIP's did in 2017. But this ignores a key difference between Brexit Party and Conservative supporters. In our national survey conducted shortly after the European elections, 78% of Brexit Party identifiers wanted to leave the EU with no deal. This compared with only 46% of Conservative identifiers who wanted this outcome.

In a rally in London Nigel Farage committed his party to no deal. He was quick to point out that Johnson had voted for Theresa May's agreement when it came up for a third time in parliament – and was therefore not to be trusted. The prime minister is taking a very hard line against Conservative rebels by threatening to remove the whip from them, but at the same time he is arguing that he wants a deal with the EU – something which is an anathema to the Brexit party supporters.

This lack of trust in the prime minister to deliver a no-deal Brexit puts him in a tricky situation – he needs most of the Brexit Party supporters to produce a no-deal outcome. Given his insistence that he is still seeking a deal with Brussels, Johnson is unlikely to win Brexit Party voters until there is actually a no-deal Brexit.

The Brexit Party will not take seats in a snap election, but it could easily stymie the Conservatives' chances of winning.

The prime minister has had to seek an early election since the alternative was to stagger on without a majority and with parliamentary action to stop a no-deal Brexit becoming a reality. The campaign hasn't formally begun yet, but the posturing is underway. The outcome, though, remains very difficult to predict.